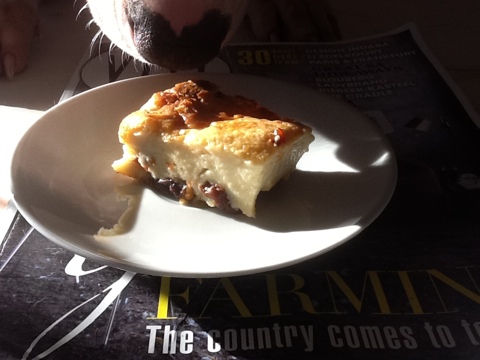 Known as Far Breton in France, where it originates, it is incredibly quick and easy to make… and absolutely delicious!! I delivered a slice to my grandmother who is not known to repeat the words ‘THIS IS ABSOLUTELY DELICIOUS’ several times in a row. She insisted that I bake it for our next family get-together. She promised in return that she’d show me how to prepare her very own one-of-a-kind non-bake rice pudding recipe.

I used Richard Bertinet’s recipe from his bread book, Crust. I added a handful of raisins and reduced the amount of prunes called for. I also added a teeny sprinkling of cinnamon to the batter.

You will also need pinch of salt (I added 3 small pinches of salt) and some butter for greasing an earthenware dish.

Richard Bertinet recommends greasing a 20 x 25cm (or thereabouts) earthenware dish with 50g of melted butter. If you cut down on this then the dish is pretty much a ‘fat-free’ dessert. Your dish should be about 4cm deep.

Place your oven tray in the centre of your oven and preheat to 220 degrees celsius.

Mixing up the batter shouldn’t take you much longer than 15 minutes.

Warm the prunes slightly and spread them out on the base of your dish (you could cut them into smaller pieces and use less fruit). Whisk the eggs and sugar together so that they are well combined. Gradually sift in the flour while whisking and add some salt. Finally, whisk in the milk and pour the batter over the prunes.

Pop the dish into the oven for ten minutes before turning the temperature down to 180 degrees celsius. Bake for another half an hour or so — until such time as a knife blade comes out clean. I added ten minutes to my baking time because I used less fruit.

Enjoy warm or cold, as a dessert or as a breakfast treat. Actually, Bertinet points out that Far Breton used to be eaten for lunch by agricultural workers in France. And why not? Far Breton can be sliced like bread when it is cold… which should make it perfectly suitable for anyone… at any time of day?

The writing got me into a frame of mind where I felt ready to experience the silent ten-day Vipassana meditation retreat that my friend Dylan recommended.  It was an incredible experience but since this is a patisserie blog, I won’t say too much here except that one of my biggest fears about the retreat was that I was surely going to suffer…

I wasn’t concerned about what it would be like for a hyperactive person to sit in one place for several hours a day or worse still, to meditate cross-legged for a full one hour without moving.  Nor was I thinking about waking up at 4 am or what I would find as I exited the outer world to dive into the workings of my own mind and body.  Nope, I was worrying about the food.  I was anxious that I would suffer from a rumbling, grumbling, hungry tummy, based on the fact that only two meals were to be served every day:  6.30am breakfast and 11am lunch and that we were not permitted to take our own snacks with us.

I am pleased to report that the food turned out to be delicious vegetarian and was served in generous quantities.  I only felt hungry once (maybe we really don’t need to eat as much or as often as we think).   And I was delighted on the final day: we were served a cardamom scented creamy dessert for breakfast.  Bliss!

The dessert was symbolic of the story our teacher, Goenka had narrated the day before about a boy who threw away the bowl of khir his mother had made because he was convinced that there were black stones in it.  He was wrong, the black stones were cardamom seeds. He never got to taste the sweet dish.  The moral of the story: take out what you don’t like rather than throw everything away. See the recipe for Khir below.

Back on the road to nowhere…

This recipe for Khir (also known as Kheer) requires a lot of time.  It will  serve 4- 5 people:

For the rice pudding:

Slowly boil the rice with the salt until it has cooked or place your cooked rice in a pot.  Add the milk and bring to the boil using low heat.  Simmer and stir for approximately four hours or until the rice loses its shape or the milk has reduced to half its original volume.  Stir in the sugar and cardamom seeds (I would add the cardamom seeds earlier).  You could cook the pudding for a few hours the night before and finish your cooking in the morning if you want to have it for breakfast, as we did.

Heat the oil in a frying pan, add the raisins and cashew nuts and fry until the nuts are reddish in colour and the raisins have swollen.

Lots else happened during the metaphorical smoke break which I’ll share over the next few posts eg. how to make your own recipe book.

Scraping the leftover condensed milk from my mother’s tins over the years as a child, I grew to love the sweet, magical stuff.  One day I wondered what it would be like to have one’s Very Own Tin of Condensed Milk?

There was no denying that it would be a very fine thing indeed and since it was Christmas time, I bought six tins, designed my own labels and carefully glued them onto the pots of milky gold.

My sisters freaked at Christmas that year.  It was a major thing, let me tell you, to have your Very Own Anything with four girls around.  (Yes, condensed milk was always on the menu but shared: eg. my dad would punch holes into a tin which we’d pass around or make caramel which we’d all spoon out of the tin in one sitting).

My dad was fed sweet condensed milk as a baby.  My Mom baked with it.  It’s become a family tradition.  Needless to say, I can’t resist the stuff.  Take making condensed milk ice-cream for example:  it never quite gets to the ‘ice’ stage…

Method: Mix the condensed milk, Ideal milk (evaporated milk) and vanilla extract. Whip the cream well and then fold it into the condensed milk mix. Place in the freezer until there is crystal formation.  Beat the mix again and freeze.

A friend from chef school recently asked me for this *seriously* good chocolate brownie recipe. It took awhile but after a huge spring-cleaning session, I uncovered it in an old diary. Glad I found it but I think I’m happier about the clean out. I’m feeling 1000 tons lighter after throwing away boxes of things/photos/letters/files/memories I’ve been carrying around for years. Lighter (perhaps) than the mousse topping on this blurry brownie shot!

I made the quickest Apple Pie the other day.  I was driven by a picture in my head of an apple pie without a lid on it but I was anxious that the apples would be dry as a result… the chief tasters, however, had me thinking that I would definitely make it again.  Their words:

‘WOW, this is DELICIOUS!’

‘Hmmmmmmm, this is the best apple pie I’ve had in ages!’

‘Ooooohhhhh, I love how light it is and that it’s not overly sweet!’

Here is my rough & tumble recipe (the ingredients are highlighted in bold):

When the apple pie came out of the oven, I swirled the juices over the apples (which then had time to set on the journey down the road to the chief tasters).  I arrived to find my aunt photographing flowers…

My grandmother reading a book… 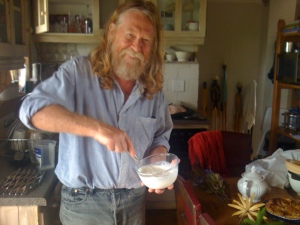 And Claire on the phone to her love….

It wasn’t long before everyone gathered in the studio for a good ol’ fashioned tea. 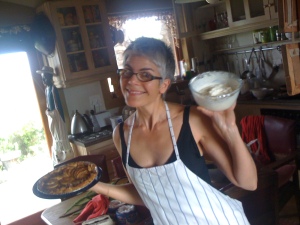 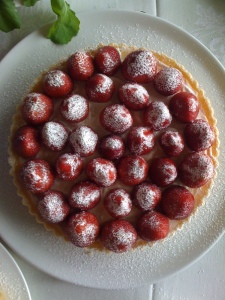 I have used this baked cheesecake recipe for several functions, including my own birthday party.

It ALWAYS goes down well with everybody!  You can use your imagination for the toppings – I love using whole fresh strawberries on top (dusted with icing sugar).  You could also serve it plain, why not?!

Allow your cheesecake to cool before serving.

I made a caramel and banana tart (called Banoffi, Bananarama and who knows what else!) on a sweet pastry base for the band.  It was the first time I worked with my new extra-large pie dish.  WELL, now I know why those monsters aren’t used too often.  It was pretty hard to roll out the pastry to that size without breaking it so I just ended up moulding the pastry into the dish with my fingers.

‘You look like a sculptor at work,’ said Starwalker peeping out from behind Julia Child’s ‘My Life in France’.

I smiled because that’s exactly how it felt.  And that’s why I love working with pastry, you’re in touch with your ingredients all the way.  Perhaps that’s why I’m not interested in making cakes that don’t require much handwork – everything gets measured up and thrown into a mixing bowl!

Sweet pastry (see ‘how to make sweet pastry’ on my blog)

1 tin of caramel (I used two in this case)

Whip up the cream and place on top of the caramel 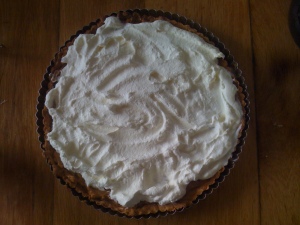 Back to the band:

I met up with them last night – it was their first gig at a restaurant in Pringle Bay.

‘Hey, Whipping It Up, that Bananarama Tart was delish!’ said Geoff during the break.

Next thing, Claire was inviting me to join them on stage as the back up percussionist on… wait for it…. the shakers.  ‘NO WAY!’ I said.  ‘OOooooooooooh, come on, you’ll enjoy it!’ sang Claire.

And guess what, folks, I did it.  I faced the music and danced.  Yes, really, that’s the only way I could get the rhythm (not being a musician an’ all!).  And although I was shaking in my shoes, I faced that audience head on, I tell ya!

BUT, Hmmmmmmmm, once again….

Except for this one local fellow, who didn’t seem to mind that the electricity had gone out and the kitchen was closed…

Way to go:  get all your ingredients ready before you start and follow the method step by step… keep your eyes on the pot, don’t take it off the heat and don’t stop whisking until the pastry custard takes on a ‘gluey’ consistency – the sign is that the custard starts ‘lifting’ slightly off the bottom and sides of the pot as you stir…

Once the milk has boiled pour it into the sugar/egg mix, add the vanilla and mix well

Once cooled use for Danish Pastries, Fruit Tartlets etc etc or whisk together with whipped cream to make a Creme Santanora (1/3 cream and 2/3rds pastry cream as used in the Saint Hanore Cake).

Born on a farm ‘with a wooden spoon in my mouth’, my mother was an avid baker and the house was often filled with the smell of fresh biscuits, puddings and sponge cakes. My job was to hold the Kenwood mixer firmly down as it whirled away. I also buttered the pans and got to lick the whisk and the spoon after scraping out the mixing bowls.

As for my father, he would regularly come home with treats and throw everything up into the air for my sisters and I to catch. Sugar wasn’t seen as a problem back then and nobody was overweight or concerned about such things. Not surprising that I signed up for a pastry course for personal interest, which is when I started this blog.

It’s been a long time since I last posted. One of the reasons is that I am not eating much butter or sugar anymore. However, I plan to be back soon as am very interested in learning and writing about sourdough next.

Thank you for visiting,